Everything I need to know, I learned from the Japenese 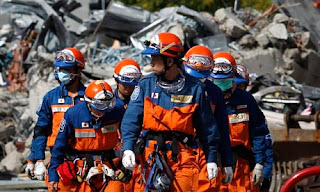 You remember those posters that were big in 1990's that had huge laundry lists of basic life affirming thoughts? You remember them 'Everything I need to know I learned in Kindergarten.' Fun and filled with truisms, they reminded us of all the wonderful little social tidbits we would do well to remember daily; Wash your hands. Share Everything. Clean up your own mess. Well, the recent natural disasters that have overwhelmed Japan in the last few weeks have shed light on how an entire country – and culture – can overcome the unthinkable.

In the wake of last week's devastating dual Earthquake/Tsunami onslaught on Japan, the country has suffered total loss of coastal cities and towns, whole towns washed away, the possibility of three nuclear power plants near or at meltdown and literally tens of thousands dead or missing and millions displaced from their homes.

These highly industrious and down-right inspiring people did not loose face but instead, went right to work, saving lives, clearing debris, finding survivors or casualties and even volunteering to help shut down two nuclear reactors that had been severely damaged (even leaking radioactivity!).

Granted, the Japanese economy is a strong, first-world economy and they are some of the most focused builders in the industrialized world. But it is hard not to admire their steadfast resolve and intuitiveness. This country has withstood two atomic bomb droppings, numerous attacks by giant fire-breathing lizards and now this. These people know how to take one on the chin. I will honor their resolve with a Sushi and Saki dinner and watch some classic anime from the 1980's. Hey, just doing my part... and to the Japanese people I say "meiyo" [I honor you!]. You have shown us all that when the going gets tough, dive headlong into that failing nuclear reactor to save the lives of millions. My slice of humble pie is going to be pretty thick for while...
Posted by Unknown at 12:38 PM No comments:

Vote for "Sent To The Corner"

Member of the Blog Directory

Add blog to our directory.